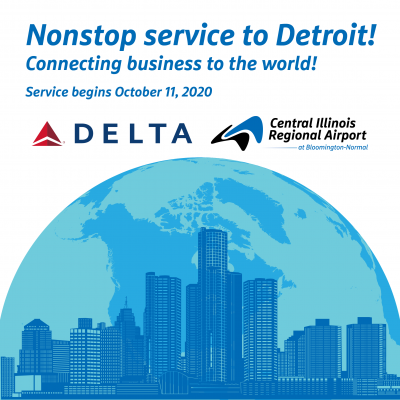 Detroit International Airport is Delta’s second largest hub with connectivity to the world.  Delta offers service to over 80 U.S.  destinations and 7 international destinations through its Detroit hub with over 260 peak day departures scheduled in October.

“Nonstop service to Detroit is vitally important to our local economy.”, said Jay Allen, Chairman of the Bloomington -Normal Airport Authority. “We have been working with Delta Air Lines on this route for some time in support of Rivian’s ongoing travel needs to ready their manufacturing facility for production.  The connectivity to the eastern U.S. and international destinations through Detroit on Delta will complement and support all major business travel generators in central Illinois.”

Rivian’s activity involving travel to and from their Normal manufacturing facility became the catalyst for the discussions with Delta Air Lines to return Detroit service to Bloomington-Normal to serve all central Illinois.

Kristin Knittel, Group Manager, Indirect Purchasing, for Rivian acknowledged the nonstop service is important for the new electric vehicle manufacturer.  “Having a direct Delta Air Lines flight between Detroit and Normal will be critical to supporting Rivian’s electric vehicle production launch and continued growth. This route will make travel from Detroit to Bloomington-Normal more efficient for Rivian, our suppliers, investors, and partners. We couldn’t be more appreciative of the time, resources, and commitment the local community and the Central Illinois Regional Airport have invested into Rivian.”

The flight  will operate between the two communities 5 days per week – Sunday, Monday, Wednesday, Thursday, Friday – with the following schedule beginning October 11, 2020:

“We’re looking forward to offering new service and greater connectivity through our Detroit hub for Bloomington’s growing community,” said Scott Santoro, Delta’s Vice President – Sales. “Through our Delta CareStandard, customers can expect the highest levels of cleanliness, more space and safer service from the moment they check in.”

The Delta CareStandard encompasses more than 100 protective measures to ensure a safe experience for customers and Delta employees. Some of these layers of protection include: